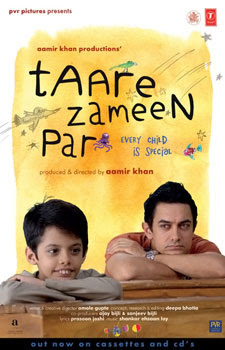 When I watched this movie a year ago, it was already running to packed audiences for over two months. I was warned by my friend that it could reduce one to tears – especially if you are a mother. There are films that make you cry, sometimes colossal tears that you pretend didn’t exist by wiping off quickly with the back of your hand, as if you were scratching your cheek. But this movie put all those to shame. Especially since I had screamed at my son for being naughty, just before leaving him at home and going to watch it. My friend was right, if you are a Mother, you would see your son in Darsheel Safary who starred as Ishaan Awasthi, and fear if you are being unkind or unfair to him.

Call me unbelievably sentimental if you like but the song “Ma” used to overwhelm me even months after I got over the movie. A year later, now I can listen to it with a firmer heart. But I do not dare to watch the movie again, lest I lose my control and make a laughing stock of myself. When my husband brought home the DVD last month and suggested we watch it together one night, I said no and went to bed early. But I did strain my ear to catch a little of the dialogues overflowing from the next room.

When TZP was selected unanimously as India’s official entry to the “Foreign Language Film” category of the Oscars, I was happy but I did feel that the selection jury would be looking for some criteria which the movie did not exactly satisfy. True enough, it was not among the final list of nominees. But the movie is beautiful, and gives a very meaningful message to parents, teachers and anyone who handles children.

Aamir Khan has come a long way from his chocolate hero days of Qayamat se Qayamat Tak. Now every year he makes a movie that is a hit before it reaches the screen. TZP was one such movie. Last year it was Ghajini.

Currently we hear that he is working on 3 Idiots which is an adaptation of the book, Five Point Someone, and the shooting (or part of it) had taken place at IIM, Bangalore. I have read the book, and I don’t fancy that Aamir and Madhavan who are closer to their 40’s are really ideal for the college going characters of the story. Well, whatever. Let’s see how it looks when it is released!