I am just back after a short family vacation and though we all are tired to the bones and beneath, we all had a good time, especially the three- and seven- year olds in the family.

I intend to bore you with the details of the trip (in parts!), so better escape while you can, or leave me a comment if you (dare) read till the end 😉 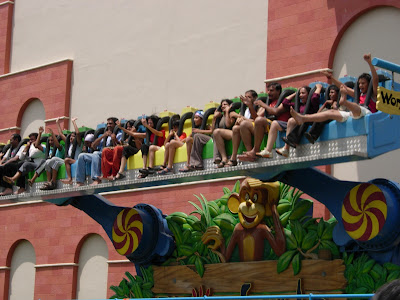 Our first visit was Wonder La, the Water Theme Park on Mysore Road, one hour’s drive from Bangalore. It was Sunday, and May month means Summer Vacation, so we did expect a huge crowd and were not disappointed. What did disappoint me was the lame security-check at the entrance. Come on, we are a country tormented by terrorists. We have every right to rip open customers’ bags and pull out purses to ensure that there are no explosives inside. Even after the attacks on Mumbai in November 2008, I have seen lax attention by the guards at Majestic Railway Station, Malls, and other places in Bangalore. Maybe (Hopefully) I am wrong and they are only pretending to be not watching. But I digress.

A water theme park is a water theme park, one has a fair idea of what to expect there. Pools, waves, wet rides, dry rides. Many, many of them. Screaming flocks of people in all rides, pretending to be not frightened or excited. Insect-like rides on the zenith from which human legs pop out like legs of the giant insect (see the pic below). 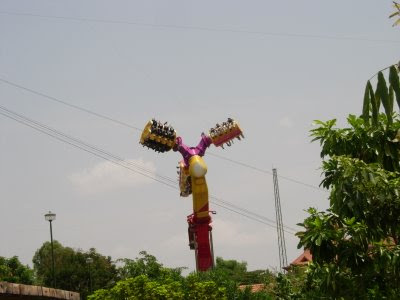 If you do your math after spending Rs600/- each at the entrance for eight people out of which only four really use the majority of the rides you would end up dissatisfied. However, if the delight on the faces of your kids is anything, then you forget the charge and just enjoy their enjoyment.

There were small rides (Carousel and another one which goes up and down slowly) for children below 100cms height, and it was cute to see the twinkling eyes and excited smiles of the little ones who rode them. My own three year old was one of them, and he was looking around, smiling, at the shrieking girls sitting next to him. He and my seven-year old nephew went together in a “Jumping Frog”, and an “Oriental Express” train, the latter helping his little cousin to sit and tie the belt…

There was a “Pirate Ship” that went slowly up and down, in which my son sat next to a little girl who was frightened and was huddling close to him, he put his arm around her and tried to comfort her, even though he himself was terrified when he looked around…

There were other real crazy rides near which none of us approached, I could not even make out why people would want to ride them and get dizzy and get themselves a stomach upset?

Over six hours after we entered, we still had not seen all the rides, but the children were tired and so were the parents so we started for Mysore.

The day ended at Hotel Shree Guru Residency, Mysore, all of us sleeping the night off like logs.

The next morning we were to start for Madikeri.