We Bangaloreans are always harsh on the Monsoons.
If it comes on schedule, we complain that the roads flood, the drains overflow and the trees fall down (not to speak of the tragedies that accompany each of these).
If it does not come in the first week of June as expected, we grumble that there is no rain, so no power supply, no water, no harvest, etc. etc.
The grievance list in either case is long.

This year, though the Monsoon was sighted ahead of schedule, it evidently got fed up of the Bangaloreans’ unfair treatment to it, and decided to pass by silently on its second trip over the skies of the Garden City, after generously cleaning Kerala of the stains of Summer.

I spotted some of them elusive Monsoon clouds as they appeared on the North Bangalore skies on Saturday evening, not looking down at us, bent on travelling North-West, maybe towards Mumbai, where the people show more affection and respect to them. However, after being caught on camera, I imagine, they had no option but to pour a part of themselves over B’lore. So it rained rather well over the weekend, and Bangaloreans sat back, relaxed. Electric power problem is solved for the time being, now lets enjoy some nice, flooding-and-vehicles-stranded-in-rain issues. 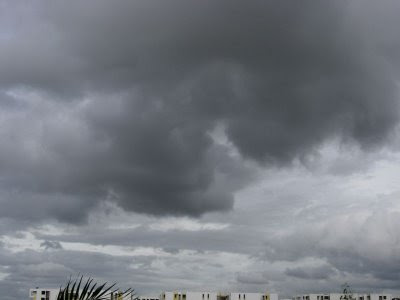