The Earth Hour and After

The Earth Hour and After

One more Earth Hour has come. And gone.

The event gains more supporters every year. Those who stared at me when I spoke of it last year, messaged me last week requesting to turn off the lights from 8.30PM to 9.30PM on March 27th, to show my allegiance to the cause of Global Warming. Last year, I had shut down all lights in my house while the rest of the apartment and street burned on, my attempts to convince the neighbourhood having failed. I do not presume that my action served some purpose, or swung this way or that the amount of heating that the planet had had to endure. I said to myself that I had done ‘my share’ – whatever that meant.

Perhaps, if the whole world (or the dark side of it) shut down power at the same time instead of going by time-zones, the effect could be a little more pronounced. But that is just another stray thought, it does not work that way.

To be frank, I believe the concept is deeper than ‘whether the Earth Hour is good enough to work wonders and cool the planet.’ I like to believe that there is a slice of good intention behind the thought.

Maybe I am misinformed or naïve, but I believe that these little ‘meaningless gestures’ are the reason why every year more people are introduced to terms like ‘Global Warming.’ If some of them remember to switch off the bathroom lights after use, I assume it means a wee bit of good? I mean, how else can one individual or his family really contribute to the mammoth cause, if not in little drops?

During the Earth Hour this year, I was at a Mall to watch a movie, having absolutely forgotten about the event, and having left a couple of lights on in my house. When I came out, a few minutes before Earth Hour terminated in India, people were lighting candles before the otherwise well-lit Mall. I saw no purpose in it and didn’t join. Indeed, the melodrama could have been avoided. 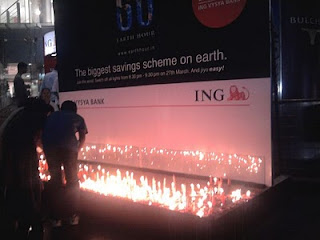 What inspired this blog is a certain group of people (who, I’m afraid, are getting exceedingly irritating) who have taken it on themselves to oppose everything anyone proposes. Their infallible argument is, “why don’t they do something-or-the-other instead of this?”

They who blow horns about bigger efforts not being taken, do they really do anything significant to change things, or do they travel cross-country by flight, use plastic bags, waste innumerable quantities of paper,… and limit themselves to dialogues?

We do maul the planet, scrounge the sea and bring down the forest to make our life what it is now. I don’t consider it remotely possible for us to stop the activities just because the Planet is becoming unfit to live in.

But that does not mean we stop trying.

Every issue has at least two sides. I’m sure we all agree there is a problem called Global Warming and we’re not doing enough to tackle it.
But isn’t Awareness the first step to acting on it?
It may not be anywhere close to enough, but is the sarcasm completely justified?