If you dread it, you’ll love it

Home/As I see it, My Son/If you dread it, you’ll love it
Previous Next

If you dread it, you’ll love it

I confess I dreaded it. To say I was terrified would not be too far off the mark. Twenty-five screaming children running amok in my house?! I tried my best to avoid it. But my motherly heart would not let me see the disappointment in my son’s eyes. After all, he had been waiting for this day for months.

Till last year he did not know the essence of birthdays – that there was a relation between growing a year older and the noisy fun called birthday parties. The connection was made early this year. From then on he began asking quite regularly, “Will all my friends come to my home for my birthday?”

At first I gave non-committal replies. Soon I was forced to change it to a firm “Yes”, though it was followed by a silent groan. By then I knew I had to give in. I decided that I just wanted to get it over with. Somehow.

As the day approached, I made a list of things to do: arrangements to be made, items to be purchased, children to invite. Hey – that’s when the fun began. For my son, it was just a matter of ‘waiting for his birthday party’. For me, it was the whole excitement of ‘making it happen’. 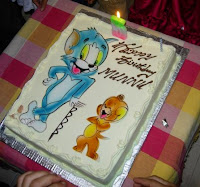 Having the children over was funn-er (is there such a word?) than I imagined. I was not in the least worried about the place becoming a mess – in fact, when it was over I was quite surprised to see the room more or less tidy.

Did the children enjoy it as much as we did? Ah, there is no way I can answer that, but the way they made noise during the party (‘the louder the merrier’?) and played with their gifts the whole weekend, I believe they did.

My son found himself overshadowed by the older children present, and chose to stay silent, quite unlike his usual self. As soon as the party was over, however, he got his own little crowd together and began playing.

So, as I was saying, the more you dread something, the better – because it can only turn out to be much better than in your wildest nightmares!