One of the gifts that my newly-turned five-year-old got for his birthday was a Snake-and-Ladder board. It’s his first board game, seeing which, I decided that a child like him, who prefers outdoor games, will not be interested in it. I thought I will have to put it away for a while. 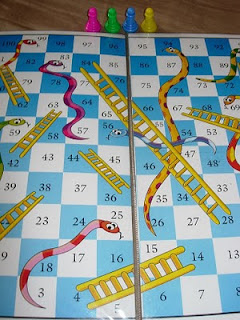 But, as usual, he did not take much time to prove me wrong. He took to it immediately. In fact, the very evening after the birthday party, we sat up late, howling over the board as our coins climbed up a ladder or slid down a snake. Almost one month later, he still comes to me daily, sits at my feet while I am having my food or tapping away at the computer or even when I am half way through my afternoon nap, and hands me a coin (usually the pink one – because “Girls like pink”) and starts the game.

It’s been ages since I played Snake-and-Ladder. Remember the board that has Ludo on the other side? This one is quite similar except that instead of the dull, unimaginative snakes of my days, these ones are quite adorable, with large eyes and mischievous gaze, that I look forward to being swallowed by them. My son does not exactly share my love for them, and the first few days he got quite upset when one of them gobbled up his coin. And – for the first time in my life – I was getting hold of ladders wherever I went! Some privileges of being a Mom.

Once he got the hang of it, playing with him became quite fun. He would find all sorts of techniques to reach the ladder. He would throw the die three times if required, or turn it around and count the dots on each side till he gets the number he wants (which would take him to the bottom of the ladder). All in full view, no furtive tricks here. And if by chance I keep climbing up jubilantly and he gets left behind? Scowling, he would find the snake closest to me, preferably the longest one in the neighbourhood, and push my pauvre pink coin down its throat. I am not allowed to laugh when his coin goes sliding down the snake, though we both howl with glee when mine does. As for me, the moment the die throws up a number that will take one of us to the snake’s mouth, I will start laughing, endangering the fate of the game itself. My punishment for that offence (if the victim is his coin) is to find myself back at the starting point. I ain’t virtue personified, myself, so sometimes I get upset at the cheating and stop the game.

Sometimes we find each other on the same box. Then his coin generously gives a kiss to mine, and snuggles close. Then, when I move forward, he tries to throw the same number so that he can stay with me.

His generosity knows no bounds when after all these kalla kalis, he reaches 100. Immediately he would take my coin (who, after being subject to insults, kisses and forcible shoving down snakes’ throats, is now a pathetic pink wreck) and place it on 100 as well: “Amma also won!”