Home/As I see it, Festival/Live and Let Love
Previous Next

Normally I would let this day pass without a mention. After all, isn’t it mature and very adult to say that Valentine’s day is a holiday largely manufactured by the greeting card industry? But I am known to change my mind on the spur of the moment if sufficiently provoked, especially on matters related to this blog. 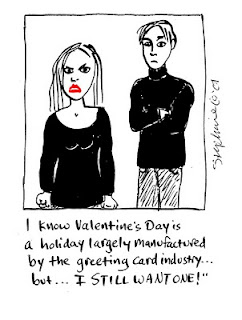 (The above picture is taken from Valentine’s Day Countdown cartoons by the extremely talented Stephanie Piro, who is also a cartoonist of the Six Chix. Make sure you check out the rest of her cartoons, and those of the other Chix!)

Thinking on the same lines, why do we even have a wedding anniversary celebration? Two people living in the same house, bickering all their life, put aside their differences for one day and go have a candle-lit dinner only to return and fight over something trivial. Or maybe, they won’t have a candle-lit dinner and fight over not having it. Obviously the greeting card companies knew what they were doing. If it were a stupid idea, it wouldn’t have caught up so well! Is it like saying social networking is an idea that was manufactured by social media marketers? Yup, we, the rest of the world, lap up the outcome of those ideas and merrily put the blame on the ones who thought about it.

I don’t have anything For or Against ‘celebrating’ Love. I could as well turn against it, given that at my age no one bothers to give me gifts any more (Sigh)! My only hope is that my little son who always presents me flowers with no particular reason attached to it, would realise that Feb 14 is all about all kinds of Love and maybe… bring me one, saying he Loves his Mom. But there are several years between such a day and today.

In the meantime, I would suggest that those of us who find such celebrations meaningless, turn a blind eye on the PDAs and console ourselves that ‘they’ll soon grow out of it.’ No use in working ourselves up, as I always say.