Making a man out of him

Home/As I see it, Attitudes, My Son/Making a man out of him
Previous Next

Making a man out of him 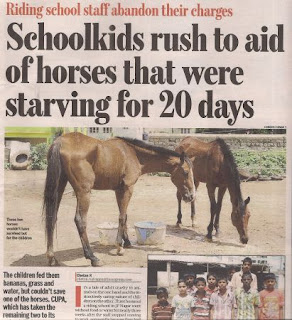 Seeing the picture of horses in the Bangalore Mirror one day, my son asked me to explain the story to him. When I read the part where “CUPA is considering legal action against the culprits”, he wanted to know more about the culprits. I replied lightly that they were some bad men who did not give any food to the horses.

My seven-and-a-half year old son then explained to me that probably these men were poor, and did not have much money to buy food. They thought food would be found somewhere in that area for the horses, and there was none. That’s what had happened. Then, luckily for them, the school children came with bananas and grass. My son could barely make himself coherent; his vocabulary was tumbling over, unable to keep pace with his thoughts.

I stared at him in wonder. Cruelty to animals is not something he imagines humans are capable of. There surely is some explanation behind it, he thinks. People cannot starve horses.

What do we do to these little gems, I wondered, in the pretext of raising them??

As Baloo the bear says to Bagheera the panther when they debate sending Mowgli back to the man-village, “They’ll ruin him! They’ll make a man out of him!” We ruin these little perfect, flawless, wonderful babies by making men and women out of them.

A few months ago, when my mother visited us, she asked me about the latest electrical equipment in the house. I explained to her briefly how it worked. Not that she had to do anything to it, she was only improving her general knowledge. A few days later when we were having dinner, my mother said, “I still get confused between the different green and orange indicators.”

I replied shortly, “Green means it is working as it should, Orange means it is on battery backup.”

A moment’s silence later – in which it was evident that my mother’s confusion was still as deep as ever – my son calmly, patiently and in no hurry at all, explained to his grandmother that the green light meant this, the orange meant that, the blinking green lights on that side meant this, the blinking orange meant that,… I watched them in amazement – my son pointing to each and elaborating its purpose and my mother nodding in understanding. I don’t think my mother will ever get confused again – he was so thorough and so patient and so clear.

I am afraid of what I am doing to him – making a man out of him. I try to teach him my own different ways of showing impatience, anger, disapproval, disappointment,… We’re in an unconscious tug of war, he and I, to teach each other a few lessons of life.

And I am terrified that sooner or later he will give in, and I will win.