What exactly is this picture trying to convey?

Home/As I see it, My Son, Thoughts/What exactly is this picture trying to convey?
Previous Next

What exactly is this picture trying to convey? 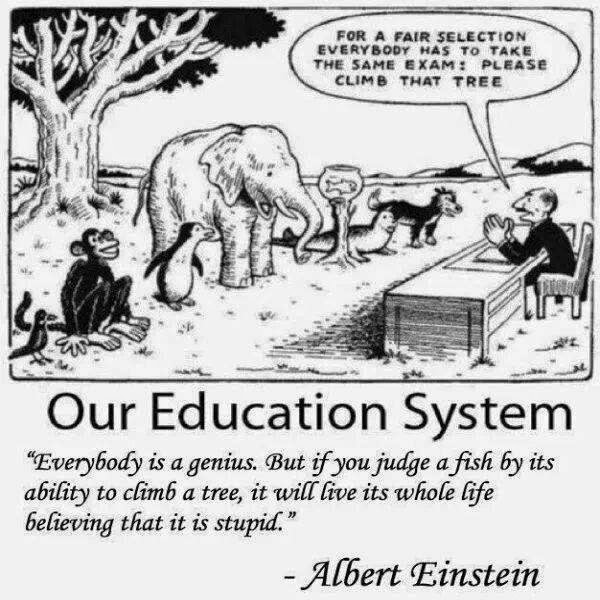 The philosophy (and Einstein) aside, what is this image trying to say?

We all love to blame the education system for what we have (or have not) become: If it were not for this stupid system, today I would be a Nobel Laureate. Someone forced me into studying and did not let me do what I loved. We love to cite the names of all the people who have dropped out of schools and then founded their own companies and became rich. Does that mean everyone who dropped out of school made it big? Does that mean people who completed their education wasted their lives?

If this system is wrong, what is the alternative? Evaluate each student on the subject of his choice alone? Is that possible? Or even recommended? You’re good in mathematics, you focus on only mathematics for the rest of your life; don’t learn any language, don’t waste time mastering the alphabet or teaching yourself to write? You’re a good swimmer, forget arithmetic, do only swimming? Heck, we don’t even have enough teachers to teach in the existing system. Are we talking about kindergarten kids or college-going youngsters? People who know little children know their interests change by the day. What are we, fish, elephant or horse that we should stick to only one talent?

A couple of years ago, while speaking to another enthusiastic friend who blames the system (but has no solution to offer, nor has he done any research about it), who keeps on about ‘children should learn only what they like to learn’ (and whose child was still an infant at the time), I said, my son is keen on football, and if I let him do only what he likes, he will never learn enough arithmetic to go to a shop and purchase anything, and he will never sit down to learn a little language to get along in life. He has to be forced into reading. He likes math and science but when there is a choice between science and TV or play, I know what he would choose. I do encourage him to play. But if he has to choose one later in life, he has to know about the others. I don’t know if I am right, but as a mother I don’t want to end up with regret ten years later.
You know what the wise dude replied? “The world needs football players too.”
My dear fellow, who says the world doesn’t? If my son chooses a football career, I would only be delighted (I think). But does that mean he should go only for football classes 24 hours, from UKG ? That I should not force him to learn a little basics of everything else? That he will pick up Mathematics and English and Malayalam and Science by himself, without there being any classes or exams in sight? What is the point you are making?? (After all, my son was at that time only six or seven years old. He has at different times wanted to be a scientist, an astronaut and a skating teacher. He loves sports but his current career aspirations do not even feature a sport! So which skill should I hone? Send him for all extra classes in science, astronomy, sports and skating? Oh I see the next headline coming up – “Mother punishes child by never letting him play with his friends and sending him to all kinds of extra-curricular activities”.)
The point this friend of mine made without listening to a word I said was that mothers like me do not encourage children to chase their dreams, instead they would force them to study stupid subjects and thus allow their dreams to perish. How simple and nasty it all sounds. How delicious.
If I had not been forced to learn History in my high school, I would never have read a thing and I would probably have asked if Gandhiji had been one of the old Prime Ministers of India. If I did not have to struggle my way through Geography, I would never have known where Brazil was located and would have gone searching for it in Africa. Forget Brazil, I would have looked for Assam near Korea. Wherever Korea was. And the Basic Science I learnt, helps me to pretend to my son that I am a genius. So do I remember everything I learned by rote in high school? Of course not. It was up to me to follow it up with more reading if I wanted. If there were no exams, I would never have bothered. I made my choice once my high school was over. But I had to know everything before I could make a choice.
When my son asks me why this or that works, I may not know the direct answer, but I know enough to make an educated guess. (Or an educated blunder, which is of course on a different level than an ignorant blunder. I also manage to get away with an educated I-don’t-know.) But did school make me a Nobel Laureate? Was that even the intention of school?
Instead of blaming the whole education system (without even giving it due thought), the point to ponder is: a child should be given opportunities and encouragement in his area of interest. But he has to learn a few other things too. I agree that backbreaking homework isn’t the right way to go, but they need to be taught what needs to be taught. If you force a child who is interested in fashion designing to join medicine, it is not necessarily the system’s fault.

There may be academically inclined children who are forced into sports; there are sports inclined children who are forced into literature; there are seemingly lazy children who are forced into everything. I repeat, it is easy to blame an entire system. Try coming up with a feasible solution that provides justice to every child and gives him wings, as they say.
And until you have a clear, practical method to suggest that will train and evaluate each child based on his skills alone while also ensuring that he learns the basics of science and history and geography and language and arithmetic, don’t show me pictures of elephants and ants, along with quotes from Einstein (I am sure he meant more than to blindly discredit the education system) and tell me that the system is flawed.

I wonder if I sound naïve, because everyone on social media laps up this image and gleefully forwards it over and over again. Maybe they know something I don’t. Maybe I will do a volte-face a few years down the line and say that all this observation and summary had been a terrible mistake. After all, they all have hopped into the bandwagon, they should know where it is headed.