I was talking to another House M.D. follower recently. (Note that we’re his followers and not fans. Calling us House’s fans would be so wrong. We hate him! We are convinced he is a constant threat to mankind. We do not miss a single episode only so we can keep an eye on him. Who knows what he is up to? Someone should be watching him!)

We wondered what House or his team, during their investigation, would think if they were to sneak into one of our houses? (For the uninitiated, House M.D.’s team breaks into patients’ houses to find clues to the mysterious illness that is causing their patients to seize, vomit blood or hallucinate. These are generally the initial symptoms which then, within hours, leads their kidneys and liver to shut down, and while the team comes up with intelligent-sounding medical terms – Sarcoidosis! Amyloidosis! Cushing’s disease! Munchausen’s syndrome! Wilson’s disease! Lupus! – we bite our nails wondering what could be the clue that we’re – I mean they’re – missing, which was right before our eyes all along.)

So if Team House breaks into our house to investigate, what would happen?
The quick answer is, within minutes they would dash out the door and conclude that this patient can be discharged. For the simple reason, the environment she lives in is so contaminated that she cannot be alive. Diagnosis: we are treating a ghost. Ergo: Discharge.

Admirers of the “Genius with Side-effects” from this part of the world would agree that watching Dr.House in action is like watching a Science Fiction Mystery movie. With a touch of Fantasy to it.

Be that as it may, we just want to get admitted at the fictional PPTH, preferably with some unfathomable disease that will kill us within 24 hours, so that Dr House and his brilliant team can diagnose us.

I mean, for a start, look at the hospital and the facilities, the attention the patients (in general) get. The attitude of the doctors and nurses. The spacious rooms. The half-empty corridors. The beeping contraptions patients are connected to for constant monitoring. Alarm bell right next to the patient. Nurses running to aid at the slightest sound. That’s what a hospital of hundred years into the future must look like. Hopefully, our great-grand children would watch House M.D and say, “What a futuristic show! They made this in the early twenty-first century!”

Four doctors would fuss over us. And they handle only one case at a time, which means, they are thinking about us all the time. They ask us personal questions and tell us that we are great people. (If we have done wrong, they would also report to the police, be warned.) We normally consider ourselves lucky if our hurriedly-examining-us-and-prescribing-meds-doctor remembers our name.

House got one thing right: Everybody lies. But I would challenge him to crack the kind of lies we can offer you. I dare you, my man! 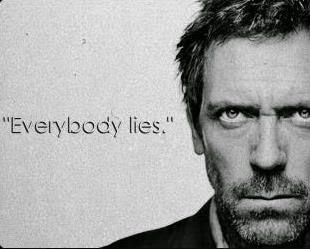 House’s team looks at the detailed medical history of the patient to form an initial diagnosis. For that, they enter the name of the patient into the computer and the computer tells him all about our history. (Are you laughing already, or are you going to stand there looking stupefied?)

Let me tell you the last time someone I know tried to track down a file here (three months ago. I am not talking about stone age). He was told by the hospital that they don’t keep records beyond five years. To House’s credit, there have been many cases where the history was not available, and yet he managed to crack the case.

The best thing is that Dr House’s team has all the time in the world. They wheel the patients to their X-ray or surgery or check up. Nurses are just the colourful backdrop, sometimes for the team’s entertainment. If we are not admitted as dying patients, the next best option would be to work there. We may not offer much medical wisdom, but we can bring him his coffee just way he likes. They have coffee machines there.

I am just wondering how many days (or hours) House would last if he were to come to India to work?