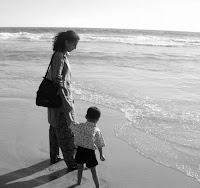 Everything is not black and white in parenting – that’s the thing.

Of course I could be talking about anything at all in life, and not just about raising kids.

There are broad Do’s and Don’t do’s but there is still such a grey area within the realm of Do’s:

Where do we draw the line between letting him have his way and keeping him from losing his way?

Between ruining the the child and spoiling the child?

Between neglecting him and pampering him?

Between protecting him and letting him make mistakes?

Between concealing the tragedies of life from him and letting him face the world?

Where is the damn line?

How far do we provide the training wheels? When do we throw him into the water and say, “Swim!” ?

How do we decide between “He is too young to know what’s best for him” and “He should be allowed to do what he likes”?

Am I showering enough love so that he can open up to me when he needs? Am I ignoring him enough so that he learns to be strong inside without depending too much on me?

The answer is, We don’t know. We never know.

As parents, pretending to have every answer right in our hands, we have absolutely no clue.

When they grow up, we begin to see signs (I suppose). If only I had cautioned him in time, we think, regretfully. Or, Thank God I thought of compelling him to do that. Or worse, God, what have I done???

To add to our misery, the old woman you despise says, You don’t know anything about being a parent. Get as far away from her as possible.

So what do we do? With a million doubts clouding our minds, we take each day as it comes. We rely on our instinct. We fall back on lessons learned while we were growing up, and most importantly, from how we have seen our child grow.  Sometimes we ask others who might know. Their answer may not be the right one for us, but it may open our eyes to options.

Consciously or unconsciously we look ahead, weigh possible choices and take a step forward. Sometimes we get only a split second to make a decision, sometimes we are given days.

We make mistakes, tons of them, sometimes grave ones, sometimes minor. Then we try to retrace our steps or to find our way back to the highway on which we assumed we had been travelling.

And when mistakes do happen, we bang our heads against the wall. Is that going to affect my child?, we ask ourselves over and over. I have tried to fix it, but have I fixed it properly? Will that do? What is my child going to learn from this?

The bottom line is, no one knows what is right and wrong. We only have opinions. Oh, yes, that we have truckloads of. Which we try to unload on others, but that is another story.

There is black and white in parenting, but that is a small region. It is important to remember that. The greys are all over the place.

And it’s the greys that keep us awake at night.