By this time our driver had a fair idea of what to expect when we informed him our scheduled time of departure to Talacauvery as 8.30AM. As could be predicted, the actual departure was at 10AM, largely owing to the little three year old refusing to budge from the children’s park where he was climbing up and down the slide and the swings.

The first part of the journey to Madikeri, 30kms from Kushala Nagara, was smooth and escaped most of our notice as we were reminiscing old stories and jokes and, laughing our heads off, remembering the foolish games of our youth and all the cheating we did. We stopped at Madikeri for a quick tea and to ground the static electricity that may have accumulated in our bodies. The real Ghat Road began from there. We had to stop many times in the route since some or other of us was feeling dizzy and on the verge of getting sick, though fortunately nothing happened.

Talacauvery is the point of origin of the River Cauvery, where it begins as a dripping spring before swelling in its downward journey and becoming the major topic of controversy between Karnataka and Tamil Nadu. There is a temple where the holy water from the spring is worshipped. The temple premise was apparently rennovated recently, for the convenience of tourists.

A climb of 369 steps (as my nephew counted it) would take one to a scenic location probably the highest point in the area and would guarantee a beautiful view on a clear day. I did not attempt the climb because I was already dizzy from the uphill drive, but some of my family did, however they could not get a good view because of the thick mist. 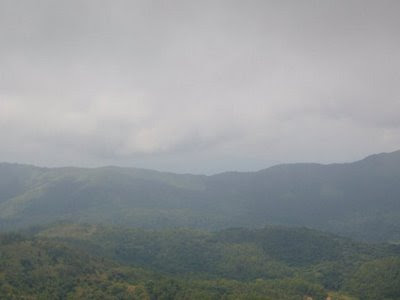 Photography was not allowed in the temple as per a directive at the entrance, however we spotted someone with a video camera shooting away the dieties. There is always someone who is ready to break rules who believes every rule has an exception for him! We did not take out our cameras so I do not have any pictures to share.

There are no good hotels at that height, only small shops where we can buy vadas or packed crispies like Lays or cheese balls. To get lunch we had to come down around 10kms to Bhagamandala. Every other hotel in that area had the name ‘Cauvery’ in it. Hotel Mayura Cauvery, Hotel Cauvery, and so on… We requested our driver to go slow on the drive down, so that we don’t feel uncomfortable after lunch. Everyone started word games to distract themselves; even the ones who were not playing listened and contributed here and there, so the twists and turns did not make a great impact on any of us.

We were all very exhausted by the time we reached Madikeri, but proceeded to Abbey Falls where the waterfall was thin, we were told that after the monsoons it would be heavy and quite a sight to see. We had to travel down a flight of steps to reach the falls and the very thought of climbing back terrified me. But as always the return journey is easier than the forward, and we reached the top where our Qualis was parked, almost in no time.

I just wanted to get back to our rooms and relax, but Raja’s seat was just 2kms away from Madikeri town, so everyone suggested that we see that as well. So we had tea and dosas, and proceeded to Raja’s Seat. It is another view-point, where the Rajas of old are believed to have sat listening to the grievances of the citizens. The park now has a Musical Fountain, indeed as my sister remarked, there seems to be a musical fountain in almost every tourist spot in Karnataka!!

Then started the next 30kms back to Kushala Nagara Veerabhoomi resort, for dinner and a collapse.

Day 4 – Nisargadhaama, and back to Bangalore.