We checked out from Veerabhoomi Resort before 10AM, and set out for Nisargadhaama which was a few kms away. Our plan was to spend an hour or so and then start for Bangalore. However we ended up spending about four hours there!

Nisargadhaama is a small island wildlife sanctuary, where Rabbits, Deer and other animals(we were told) are housed. We climbed a tree house on our walk towards the Deer, and the bamboos made quite a forest around us. The deer could be fed with cabbage we could buy there, one could also feed the two elephants that were taking people for a ride – I mean a real elephant ride. We too climbed on top of one and made a small tour. However, being as old as we are means we wonder about whether the elephant is well-fed, what it feels to be walking about all day carrying humans in addition to the saddles(whatever heavy stuff they are made of) and the ropes binding them, does it get enough rest in between the rides and so on. They seemed to have resigned themselves to this life. 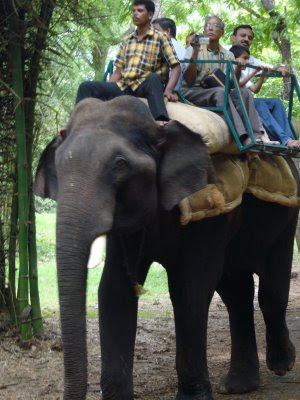 We had taken tickets for a four-seater pedal boat but when we reached the starting point, a number of people were already waiting and there was only one four-seater. When our turn came and the free boat was a two-seater we settled for it (otherwise we would have ended up waiting for another 20 minutes or more).
It was now time to leave, have lunch and start back to Bangalore. Madikeri-Mysore was covered in an hour and a half (we did not enter Mysore town) and then we hit the Mysore-Bangalore highway at a consistent pace except at Mandya where the town slowed us down with its share of traffic, however all those were nothing compared to what we endured when we entered Bangalore. One and a half hours of moving at a snail’s pace, it was all we could do to keep from screaming out our frustration. The fact that our house is in the northern point of Bangalore didn’t help, either. I have no idea how Bangalore is going to cope with its ever-growing traffic. I believe someone should stop new vehicles from being brought to Bangalore… no amount of trees cut down is going to make the roads wide enough to cater to the number of vehicles on the road today(and increasing!).
It was good to be back home, to have a cup of tea and dinner and settle in for the night.
The vacation was almost over and it was good while it lasted.
By Jeena R Papaadi|2018-12-10T15:52:46+00:00May 26th, 2009|Places|0 Comments