Home/As I see it, Networking/My disappointments with Twitter
Previous Next

I was not impressed much with orkut when I was introduced to it years ago. Networking was all very fine, but somehow it appeared to be not my idea of making friends. So I stopped visiting orkut altogether. In the recent years, my interest was caught by blogs (the reading and writing of them). And in most of the blogs I read, I came across the inevitable “Follow me on twitter” link. I refused to be impressed, I told myself “Twitter is like orkut, I am not going to be captivated by it”. But there came a day when I decided to give Twitter a try and then decide what to decide about it – it somehow sounded different from orkut and other sites. Thus was born twitter.com/jean_blore. Then came a problem. I did not know many twitterers, so I sat around wondering, what next. I tried posting a few lines on “What I am doing now” but there was no one to read me 🙂

My wanderings among the tweets of others (who have 100+, 500+ and 1000+ followers) made me wonder, is anyone really reading all these messages coming from their infinite network of friends? Apparently they do, because I see replies, and if I take the trouble of switching between the tweets of two users, I can manage to comprehend an entire conversation! None of which is my business of course, but since they are in the public domain, I am free to read if I so wish.

The only benefit, if I may say so, that I found in my experiments with Twitter is something called twitterfeed, which scans my blog (RSS) every few hours and feeds my new posts as my tweets, to the benefit of anyone who strays into my tweet-domain by mistake. But since no one reads me on twitter, it’s of no use anyway. 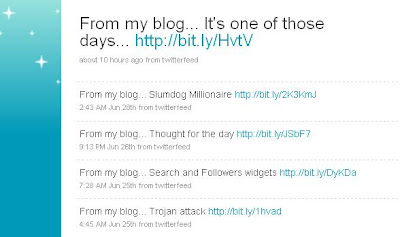