Ice Age3: Dawn of the Dinosaurs

Home/Movies/Ice Age3: Dawn of the Dinosaurs
Previous Next

Ice Age3: Dawn of the Dinosaurs 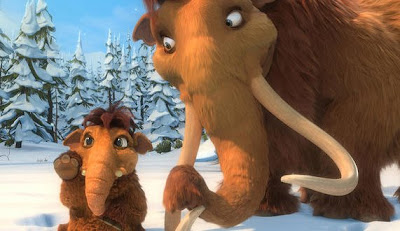 Ice Age has come of age. Sid’s herd is no longer the slow-moving, big set of bachelors they were when they restored the human baby to his Father in 2002. Manny is ready to become a father, Sid is the self-proclaimed foster-mother to three little dinosaur babies, Diego has tired of the absence of challenges in life and leaves the herd in search of adventure. The return of the Dinosaur Mother in search of her babies serves to bring the herd back together, as she carries away Sid with her to the world of the Dinosaurs, because after all, Sid is the “sticky, gluey stuff that keeps the herd together”. Life picks up pace and everything happens in a Whooosh followed by a Whooosh, and the herd goes through enough adventure to make Diego want to stay back with the family.

Scrat’s misadventures with his nut and his new mate become exceedingly dull and repetitive that one would want to cry, “Somebody give him an acorn, and teach him to keep it!”
Some of the jokes were not really meant for children.

The herd has become bigger, with the arrival of Ellie Junior, who they name Peaches, and a non-resident member from the Dinosaur world, the whacky weasel called Buck.

As always, I was left wondering if the movie was completely man-made? Is it possible that there is a world still covered with ice and inhabited by mammoths somewhere, that a set of men are secretly filming? How else can one explain the perfect animation and life-like animals?

The occasional ripples of laughter from the audience and the “awwww” when Peaches first arrives perhaps meant that everyone enjoyed themselves thoroughly, though more than one little baby started crying every time the dinosaur roared.

I see another adventure in store for lil Peaches and her Father, and Uncles Diego and Sid, in the form of Ice Age 4.

Now Showing. Ice Age: Dawn of the Dinosaurs.
Running to full house for the third week in cinemas across Bangalore.