I have been after my Father ever since he left comments on my blog post on Total Solar Eclipse, (comments under the name Astroram) to upload or send me snaps of the previous solar eclipses that he has witnessed in different parts of India (he is one enthusiastic sky-watcher, I tell you!). Finally he consented, and sent me a few, with a short note on each.

The three black-and-white photographs below were taken on 16th Feb 1980, at Gokarn in Karnataka State. The first with a slightly big diamond was the first and when the disk of the moon slid in fully, the diamond became small and then the totality with the beautiful corona. It was breathtaking indeed. Notice the circular shape of the big corona, which is typical of times around sunspot maximum. 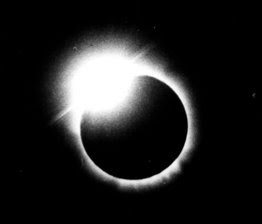 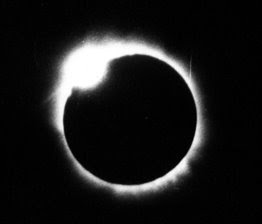 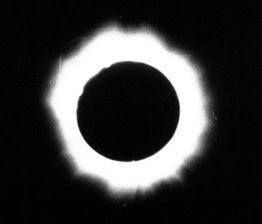 The below image was taken on 19th March 2007 at Vashi, Navi Mumbai. It was a beautiful partial eclipse sans clouds. 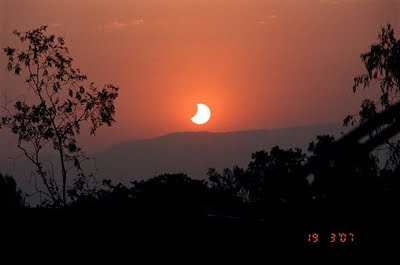 The total solar eclipse of 22nd July, 2009 was the longest in terms of maximum totality duration of the 21st century – lasting over six and a half minutes. Not since Saros 1991 have astronomers and eclipse chasers been treated to such a length of time! The eclipse footprint started in India along the western shore near Surat moved towards Butan and reached the southern tip of Nepal and the northern edge of Bangladesh. For other lucky astronomers, the eclipse path also took the event over the Chinese main land – yielding five minutes of totality. Leaving Shanghai the shadow raced across the ocean to fall across islands such as Toshima and Akusaki south of Japan and eventually the Marshall islands. Where did the longest time occur? The maximum eclipse duration of 6 minutes and 43 seconds was far off the coast in the Pacific Ocean!