My son is a very keen observer. From the time he was very small, he has surprised us with the speed at which he noticed and picked up our habits, our actions, and when he started speaking sentences (and he started quite early),  he began asking the Whys and Wherefores of everything. In fact, so much so that sometimes I have to ask him (rather sternly) to stop the queries for a while, when I speak to someone on the phone.

He is rather addicted to Cartoon channels, a practice we increasingly encouraged (though hesitantly at first) because that was the only way we could get him to sit still for a few minutes.

So it was that one day a few months ago, while he was watching the adventures of Tom & Jerry, (a 100th rerun episode) he came to me and asked, “Does Tom like girl-cats very much?”
I said cautiously, “It appears so.” I was rather worried about where the conversation was heading; explaining romance to a three-year-old was not what I was prepared for.
He asked me after a pause, “And do girls like flowers very much?” Tom was apparently handing out flowers to the women in the area.
“Oh, yes,” I said, “Girls generally like flowers very much.”
He thought about this for a while, and asked no further questions. I was relieved.

A couple of days later, when we went out for a walk, suddenly he ran towards some flowers and plucked one, before I could stop him – it was from someone else’ garden. I launched into a lecture of it not being nice to pluck flowers, aren’t they more beautiful on the plant? and so on, when he gave it to me and said, “Flowers for you – you are a girl. You like flowers.”

I was speechless. From then on, he has made it a habit to give me flowers every time we go out for a walk, and I gently remind him not to pluck from the garden, and only from the bushes on the roadside. I often tell myself I should carry a camera when we go next, to capture this cute picture of him running to me with a tiny flower, but always would remember only later. Once I did, and shot this – he was too quick for my lens and ended up a little off-focus, nevertheless, here it is. 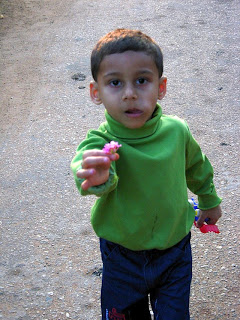