The Week that Was – Changes up here

Home/Anecdotes, As I see it, Networking/The Week that Was – Changes up here
Previous Next

The Week that Was – Changes up here

So you noticed? I wanted to change the blog template itself, but blogger gave me no good choices. The ones available have had no update to them in more than a year, and I really don’t want to change my template to something that another of my friends has.
The change in title was in the pipeline for quite a while, and when it happened, I chose to change the colour rather than select a bad template.
Do you like the new look?

I finally did something that my friend Nikhil had been suggesting all along. I created a Facebook profile. So far I had bravely repelled the pressures from my friends (including him) who tried to tempt me by uploading photos there (the darn site needs a registration before it shows us snaps), who boasted of 500 Facebook friends, and so on.

So what did I find on registering at FaceBook?
A load of old friends who prefer FaceBooking to Emailing, for reasons unknown. (I personally prefer Emails. At least, until now.)
Friends I haven’t seen in 10-15 years, and barely recognise.
Friends who are in unbelievable positions in enviable locations around the World. 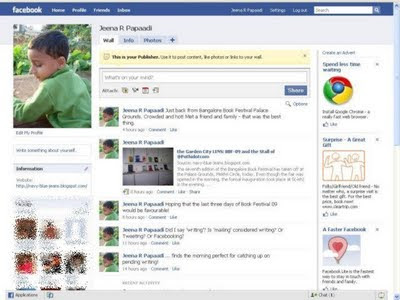 Having been on Twitter for a while, I took two steps back on encountering FaceBook. Twitter is so very simple, with minimal links and activities. And yet, it took me days to get used to it. In FaceBook, you can Message, Mail, Chat, Wall, Nudge, Poke, Scream, Hit, Kick, …, besides playing a variety of games (none of which I attempted so far – I am already groggy seeing the million things in my Homepage or whatever it is called). By mistake I forgot to accept a friendship request from someone, and have no clue how to find him again.

Speak of the travails of Networking!