The best time to hit Mumbai is early morning.
For a few lucky ones it makes no difference, but a majority of Mumbaikars are unlucky folk who find their homes at least half an hour away from the closest railway station or airport. At least. And I am talking not only with respect to the kilometres to cover. If you arrive later in the day, you find yourself at the mercy of the blistering sun and infuriating traffic jams, and the expected half hour drive could stretch to (or seem like) eternity.
Which is why we opted for 6AM Indigo Airlines from Bangalore. If I thought holiday rush was a thing that was part of the history within the walls of the old HAL airport, I could not have been more mistaken. I reached the airport at a few minutes past five, assuming I had enough time to check-in. Alas, flowing out of the airport was a long queue – to enter BIAL.

A man in Kingfisher Airlines colours approached and asked, “Madam, Kingfisher?” Already regretting that I was not travelling with their airlines, I shook my head. I was stranded in the sea of humans, with no one from Indigo in sight. Suffice it to say that I broke into the line, pushed the trolley and pulled my five-year-old into the airport, hoping that the lady behind me would make no fuss. I had to get in. Somehow.

The flight was delayed by about 20 minutes, but we still managed to cheat the Mumbai sun and traffic by a hair’s breadth. 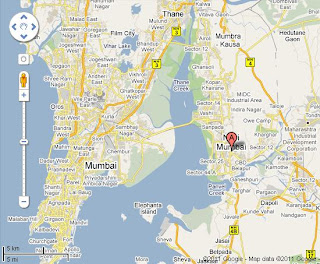 Mumbai and Navi Mumbai (a.k.a New Bombay) in Google Maps
Right outside Mumbai airport, there was an open-air food court with a few kiosks (dosa /sandwich /pizza /pasta /tea /juice et al) where we wasted no time in pouncing on dosa and other breakfast delicacies.

The drive to Navi Mumbai seemed to take forever, so much so that we got sick by the end of it. The road, the crowd, the slums and the dust lost their charm after half an hour. The five-year old became restless and kept asking, “When will we reach? Will we reach today?”

At one chaotic junction (nothing compared to the rush hour chaos, though), our car brushed against an auto. The autowallah immediately stepped out and started gesturing and sputtering. For once, the fault was not on the side of an autowallah (the whole of India knows and fears the driving and other skills of the autowallah) and he intended to make the best of it. The girl in the passenger seat was tapping on her mobile, a picture of nonchalance. Our car slowly eased out of the situation and sped away. No trouble, no involvement of policemen, no traffic jam, no time wasted. We all had to get going. Somehow.

Almost every vehicle you find on the road carries smudges or scratches, dents or other marks of having survived (and daily surviving) Mumbai. There is a certain recklessness in the way they manoeuvre the roads that leaves us amazed that (touch wood) so few accidents happen.

“Navi Mumbai is the largest planned city on the planet.” – Wikipedia

The house on the top floor was a furnace slowly getting heated up. We were not surprised to see air conditioning units protruding from the walls in every floor of the building. I was warned about the temperature indoors and already knew how humid Mumbai could get, but was still taken aback by it.

Thus began ten days of isolation from the lure of Internet – with only books, TV and people for company. Okay, I admit I did check emails once or twice (or… maybe about five times!) but then a writer on the look out for opportunities (who has already made a mistake once) cannot keep herself from emails that long. I convince myself it is not wise to be so totally in isolation.

Among the books I read were the Diary of a Wimpy Kid series and City of Djinns. (If you’re smirking at the first, I am sure you’re one of those who don’t adore KungFu Panda or The Lion King or Calvin and Hobbes or Dennis the Menace, so there’s nothing more to be said.) I finally managed to complete The Catcher in the Rye. The TV happened to be taken over by the kids so most of my watching was dedicated to cartoon channels.


Sector-17 is a commercial area which, I am told, is the first place people turn to, to find what they need – from chatt to toys to shoes to clothes to other essentials of daily life. One evening we went there to pick up a few items and do some window shopping.

On our way back in an auto, we had to cross several traffic signals. Our autowallah obviously had no regard for them, and was hopping red lights whenever possible. There was no sign of any policeman anywhere. The auto was flying, as if the driver forgot it was merely a three-wheeler on an Indian road. He must have fancied himself as a Boeing pilot. We hugged the children closer, afraid they would shoot off and bang their heads on the bar when the fellow eventually hit the brakes. The way he was going I almost expected the vehicle to topple over. The autowallah had to reach the destination. Somehow.

At one of those junctions, to our surprise he chose to stop for the signal. When it turned green, the auto dashed forward only to be brought to a screeching halt because a car from one side had jumped red light and was right on our path. Our hearts were in our mouths. When we recovered from that shock (the autowallah was unconcerned and continued his victory lap of red-light-hopping), I finally told him, “Please go slow. We’re in no hurry to get home.”

For all their shortcomings, I appreciate the Mumbai autowallahs for one thing. Real Mumbaikars may have a different opinion on this, but during those ten days, (I must have travelled in autos seven or eight times) every time the autowallahs took care to return exact change, be it one rupee or two or ten.