Continued from “Ten Days in Navi Mumbai – Somehow Rules“
Humidity is the ruling emotion of Mumbai, Old and New. I had so forgotten how unimaginably exasperating it could get. The fact is that when you’re in Bangalore, try as you might you would not recall the exact nature of Mumbai’s (or, for that matter, Kerala’s) humidity. I did carry enough summer clothes with me but I discovered I was ill-equipped to battle the weather.


The difference between Bangalore’s summer and Mumbai’s is that in Bangalore’s dry heat you wish to cover yourself when you go out so that the sun doesn’t get to burn your skin. In Mumbai the more you cover yourself, the more you sweat, and the more times you yearn for a bath or a gulp of water. One has to keep this fact in mind when choosing the wardrobe for the trip.
Every evening between eight and nine o’clock the door bell would ring twice. First comes the ironwallah, then the man who sold eggs. The ironwallah keeps an account on each house, and the payment is done at the end of every month. The clothes he takes away one night would be returned the next. The system seemed so different from Bangalore: our local ironwallah makes his appearance in the morning once or twice a week, or whenever it is convenient for him, and vanishes with the clothes, sometimes for two-three days at a time. The payment is made when he returns them, pressed and folded. By that time, naturally, he and I would have forgotten how many pieces of clothing were given.
Lonavala, off the Mumbai-Pune Expressway, about midway between Mumbai and Pune, is one of the places that people from these busy cities throng during weekends. The best thing about Lonavala is, in my opinion, its distance from Navi Mumbai: you reach before you can say ‘Lonavala’. Well, almost. 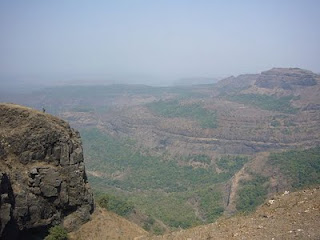 Lonavala – ‘Lion Point’ as per the signpost and ‘Tiger Point’ as per the locals
We joined the bandwagon one Saturday morning and drove to Lonavala. There was a food court on the highway where we stopped for breakfast. It was 9AM and the breakfast flock was out in full capacity. The counters were crowded and one had to squeeze in if one’s desire for food had to be conveyed. It was not the people who came first that were first served, it was the ones who had the knack of squeezing through and making themselves heard. People did not wait for others to finish their order before speaking, and there was no queue. Only the loudest and swiftest would survive.
There was not a single chair free. When one of us went to place the order, the others kept an eye on the chairs that were falling vacant and pounced on them. After all, we had to sit down and have our food. Somehow.
I cannot let the food court pass without a brief mention of the mistake I made of visiting the public toilet near the food court. Suffice to say that cleanliness and hygiene are some of the important lessons that are missing from our schools.
Lonavala was pleasant, and we had a good stay at a resort that had enough space for kids to play and a swimming pool where they could splash all evening. My son lost his footing twice inside the pool and swallowed a little water, which, over the next few days, became the hot story he would narrate to everyone he met. There were a few places of interest around Lonavala and Khandala, though the waterfalls had all dried up and we could only see some rocks. We returned the next day, after purchasing Lonavala chikkis and other varieties of sweets that Lonavala is famous for.
We could not put our finger on who/what the culprit was, though we leaned heavily towards Lonavala and the food we had on our way back – especially at a small hotel with the enticing name of Cochin Café or something. One day after we returned, two members of the gang fell sick, throwing up continuously and complaining of stomach pain. My five-year-old was one of them, though he responded immediately to medicines and was okay after a few harrowing hours. The other person was not so lucky and had to be hospitalised.
Once the ordeal was over, it was time to pack up and return home. If the flight were not delayed by 30 minutes, we might never have made it – the evening rush hour caught us off-guard.

Bangalore welcomed us with a cool, relieving drizzle, showing no trace of summer. The landing was slightly unsteady and delayed due to thundershower. The five-year-old was eager to catch up with his friends, many of whom would return after vacation only much later.