Home/Books, Writing/“Joseph Anton: A Memoir” by Salman Rushdie
Previous Next

The relationship between a book and its author is the same as that of a baby and its mother. A droplet of water and the Ocean. The One that was born from the Other. Both are one and the same, and yet both have their own individuality, uniqueness. Their thoughts are entwined even when they are different. Just as a baby holds on to his mother’s hand while he walks: connected, but independent.

I did not discover Salman Rushdie the way I discovered other writers. Many eminent authors came to me highly recommended. I found others at the library or the bookshop. As a hungry reader I pounced on them and lost myself in their worlds. Rushdie, on the other hand, burst into my view a few years ago, largely owing to his famously controversial book. And yet, avid reader, book lover and aspiring writer though I was, I did not for a moment imagine I would want to read him to find out what the furore was all about. It just did not cross my mind that he was an author. He wrote books. I do not understand today why it did not cross my mind – until early last year at the Jaipur Literary Festival, when the controversy resurfaced with Indians and Pakistanis (and probably others) boycotting the event where Rushdie was expected to be present.

Wasn’t this issue something like, twenty years old?? I thought. Wasn’t it time to put it behind? Hasn’t the author written anything else after that, or what? After all, isn’t it the book that’s considered offensive, and not the author? But without having read The Satanic Verses, how could I form an opinion, any opinion? It dawned on me finally: I should read him. The Satanic Verses being banned in India, the only alternative was Midnight’s Children.

Midnight’s Children left me spellbound. A new author had just found his way to my Favourite Authors’ List.  I had to read more of him. There were other books but my curiosity was piqued by the controversy. If I could not get hold of the banned book, I could read all about it in the memoir, the latest work by Rushdie. I had to. 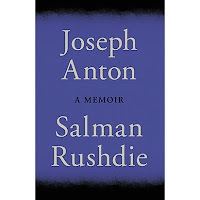 ‘Joseph Anton: A Memoir’ describes the Satanic Verses days from Rushdie’s life. Everything that built up to the book and everything that happened afterwards. I think it was important that Rushdie wrote ‘Joseph Anton’. It is a huge book, bulkier than his other books, but people who take the time to read it would at least pause to consider that The Satanic Verses was probably more than a mere ‘religion-bashing’ or a ‘gimmick to make more money by raking up a controversy’ (as I was led to believe). It is important to understand what inspired the author to write The Satanic Verses, and how his life changed overnight. What place the book holds in the story of Literature and how the book grew out of its own pages and became a chapter in history. It is important that Salman Rushdie ceases to be merely a “controversial author of a controversial book” in the eyes of people like me.

I haven’t read the controversial book. Once (If) I do, I would either decide it was an outstanding Rushdie work and the controversy was blown-out-of-proportion, or that the book, for all its literary merits, did take a step across the limits (whatever that means) and the controversy was justified. I may like the book, or I may not. I cannot say. As a reader, I have the freedom to decide. But my freedom ends when the decision is made, where the author’s nose begins.

A book, though it does represent the author’s thoughts and ideas, is also an infant that has grown up and finds its own place in the world. It is important for us, as readers, to understand where the author ends and the book begins, where the author gives a free rein to his characters, his plot and his theme, where the book begins to rise to its feet and stand on its own. The book is its author even when it is not. The book takes the imagination of the author to places where he could not go alone. The book flaps its wings and takes flight across the borders of the ordinary, the mundane and the unexplored, only to return at night to its own home, the arms of its author.

It takes considerable courage to write something that could be termed sensitive. To let the beast out that had been struggling to break loose. I have seen authors insert a clause in their foreword to mollify readers, to prevent them from taking offense. It takes considerable courage to write something and not edit it out. To not write a clause in the foreword asking for pardon. To go ahead knowing that this could raise a few red flags across the world. To write nonetheless, just for the sheer joy of writing.