A Rumble in the Night

Home/News/A Rumble in the Night
Previous Next

A Rumble in the Night

It’s official: henceforth, until further notice, we are terrified of the rain.

In the chilling hours of the chilly night, everyone huddled together to discuss how “Mobile and TV signals had vanished a few minutes before it happened and we knew something huge was coming,” and “we felt the building shake,” and “we thought it was an earthquake,” and “the ground just quivered,” and “I was jolted out of my sleep,” and “is this the kind of horror people in Kashmir must have experienced in their recent flood and rains” and “it’s been raining and raining for hours” and “the last time such a downpour occurred in Bangalore was about ten years ago” and so forth.

It is interesting (in a not-so-exciting way) how the rain has progressed from our list of “fun” things to “mildly irritating” to “annoying” until, all of a sudden last night, it jumped to the top of our list of terrors, leaving the usual nightmares lingering far below.

Bangalore is known for its civilised rains (though with uncivilised consequences) – the kind that knows how to behave. Rain a little, clog those drains, jam the traffic, unhinge a few trees and leave within thirty minutes. But those of us from Kerala, otherwise known as Rain’s Own Country, know how unruly and childish some rains can be. We have seen them bad-tempered, we’ve seen them mischievous, we’ve seen them kind, we’ve seen them helpful, and we’ve seen them hideous. We’ve seen all kinds. They don’t scare us, no sir. They make us miserable, but we know what they are.

And when Bangalore rains misbehave as if they are just back from a vacation in Kerala, we are confused and anxious and lost.

This happened at half past ten last night: 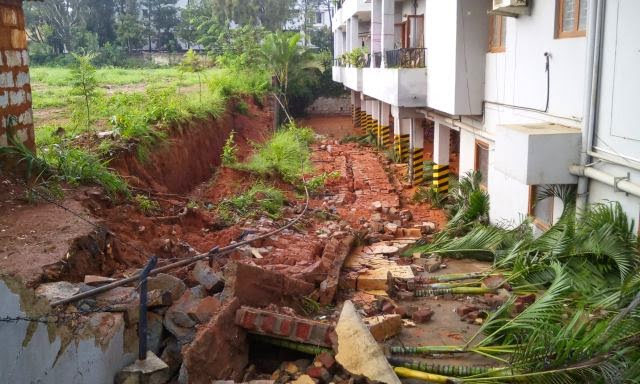 Of course, in the wisdom and brightness of the morning, it does not look like much, but in the magnified lens of the night, it took on unimaginably frightening hues. Especially because people were dragged out of bed by a loud rumble as the wall collapsed and a whrrrrrr of water cascading down to the basement. Soon there was a mad rush to drive all the cars up from the fast-filling parking lot and out to the higher street. The anxiety centred around speculations on what would happen if the water level kept rising. The uncharacteristic rain, with the continuous blast and roar of thunder and lightning, continued for four or five hours (Where did all that water come from??). The panic died around midnight.