In the days of Doordarshan and DD-2 (for those who remember the era), my sister and I watched a movie which left a huge impression on both our minds. It was an Australian film titled Picnic at Hanging Rock. About ten or twelve years old at the time, I knew precious little English and the accent was beyond us in many ways. My sister explained the story to me, as much as she could follow. The ending was too mysterious and intriguing. We spoke of (and in all likelihood, argued about) nothing else for weeks, perhaps months. We – at least, I – thought our limited grasp of the language was to blame for our confusion.

I never got a chance to see the movie afterwards.

But its impact on me was such that, over twenty years later, it led me to consider writing a short story titled “Temple of Time” where a couple of children vanish inside a mysterious temple in Kerala. Soon I realised that it was not a concept I could shrink into and contain within a short story. It dawned on me for the first time – I had a novel in my hands. 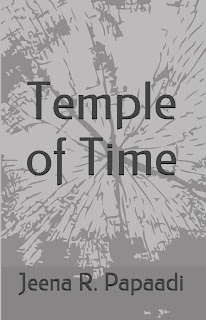 Temple of Time took two years to write. I had to pause writing as life took me through its ups and downs and shifting of priorities. Occasionally I had to give in when short-stories took precedence over the novel. Nevertheless, I came back to it every time, when the plot became much clearer and the characters developed themselves in my mind.

I finished writing Temple of Time in 2011, but it still had a long way to go. I punished a handful of people by making them read the first draft. Their feedback brought me to the unhappy conclusion that a major chunk of the plot had to be removed. Anyone who has rewritten their own work would know how gruelling a task it is.

Finally in 2013, it was ready (sort of). After a year and a half of futile attempts at finding a publisher for the book (as well as doing a million rounds of editing) and hopes rising moon-high several times only to be dashed to the ground, I decided to put it up on Amazon and see how it fares.

Ladies and Gentlemen, please welcome to the world my first novel, Temple of Time.

Abstract of Temple of Time:
Abhijeet was ten years old when his elder brother was lost, believed dead, during a college tour in the hills of Northern Kerala. Twelve years later, Abhijeet is knocked out of his dull and mundane life by an eerie dream in which his brother calls out to him.

Soon afterwards, Abhijeet finds to his shock that his brother is still alive, but in a horrifying condition and on the verge of death, at the very same place he was last seen. Abhijeet is left with a curious last message that he tries to decipher, for he feels the answer to his brother’s disappearance lies in it.

He embarks on a journey to the past, to piece together the events that led to the fateful day years ago, seeking to discover his brother’s footprints and finding himself in the process.
Read Temple of Time.